Stabbed himself in an attempt to recreate an occult ritual

Bobby Pancakes is a halfling rogue, eventual werewolf, and founding member of the Dragon Friends. Bobby is known for his sharp wit, nimble hands, good-natured attitude and loyalty to his friends. He is the only known member of House Pancake.

Bobby is an appreciator of art, music and magic, eventually becoming an arcane trickster. Fascinated by werewolves, Bobby went out of his way to become infected with lycanthropy early in his adventures. When he transforms, Bobby becomes Robert, a smooth-talking jazz lover over whom Bobby has a questionable measure of control.

Before the Dragon Friends

Bobby Pancakes grew up in Waterdeep and attended Waterdeep High. He befriended Tabitha from the strip tavern Wenches! Wenches! Wenches! He became a small-time criminal and member of the Waterdeep Guild of Thieves, Tricksters and Beggars and was in debt to Janos Meer, the Beggar King.

Unable to repay this debt, he went on the run and began to lay low in the small down of Daggerford. He began to hang out (and live) in the Dragonback Tavern alongside his friends Philge and Freezo.

Strapped for cash, the Dragon Friends look for work on a job board in Dragonback Tavern. They decide to audition for a role performing at the birthday revels of the Duke of Daggerford. Bobby is forced to think on his feet when Freezo summarily murders Leonard Swiftfeatures, one of the other auditioners. They are framed for the murder of the Duke of Daggerford and are forced on the run.

They end up back in Bobby's hometown of Waterdeep where Janos Meer began to pressure him to pay back his debts. He forced the Dragon Friends to help him take down the secret cult wreaking human-supremacist havoc across the city.

Bobby begins season 2 by sending the rest of the known alive party members from season 1 letters bearing the seal of the House of Pancake, from his dwelling in the village of Barovia. They come to meet him in the Blood and Vine Tavern, kicking off an adventure to defeat the vampire Strahd von Zarovich.

Local hero Baston, who accompanies the Dragon Friends to help free his lost love, develops a sizeable crush on Freezo, who in a critical failure in perception thinks that Baston has a crush on Bobby. Bobby meanwhile spends the season taking every possible opportunity to turn into his alter ego, Robert the jazzy werewolf, and the Dragon Friends are forced to spend a night restraining him.

Soon after entering Castle Ravenloft, Freezo makes one too many ill-mannered betrayals, prompting Bobby and Philge to pin him to the wall. Bobby demands Freezo's co-operation, and insists he stop committing needless murder. Freezo agrees, but doesn't really follow through.

The Dragon Friends defeat Strahd after a real shitstorm and a whole lot of bats, and the three adventurers - now joined permanently by Baston - are hurled through a portal to a new technologically advanced world.

At an unspecified time in their travels, Bobby is living in a house outside Daggerford with Freezo, Philge and Baston at Yulemas-time. When he realises Freezo has no Yulemas present for Philge - who has worked really hard on a present for Freezo - Bobby orders Freezo out of the house, telling him not to return without one.

Bobby goes Yulemas shopping with the other Dragon Friends on the floating market-city of New Bork. He and Baston leave on the gondola back to ground level, leaving behind Freezo - who is unable to leave due to a curse - and Philge, who got lost.

When the Dragon Friends come to their senses in the City of Brass with no memory of how they got there, Bobby has seemingly been masquerading as someone named "Hyperion Max". They escape and are eventually returned to a crystalline ship, the Heart of Glass, which the Dragon Friends have apparently been flying between the nine known realms of the Cradle for six months, searching for a way to return to Faerun, but Freezo's interference prevents them from regaining their memories. The ship's artificial intelligence, LOGAN, mentions that Bobby holds the rank of Lieutenant, but not his actual role on the crew. (Philge is the captain.)

Eventually the Dragon Friends discover that they had been working to protect the Cradle with planeswalker hero Hyperion Max, but Freezo had secretly hatched a plan to become a god. Bobby and Max discovered Freezo's secret and laid plans to stop him. Bobby told Philge and Baston and went with them to confront Freezo in his tower; when he refused to abandon his scheme, Bobby used a magical artefact to erase the Dragon Friends' memories and transport them to the Charcoal Bazaar in the City of Brass, buying Max enough time to carry out their ultimate plan to stop Freezo.

While trying to survive the Cradle without his memories, Bobby was imprisoned in the House Eternal with the other Dragon Friends for the murder of Hyperion Max. Freezo escapes by killing himself with a supposedly mundane knife, and having lost his memory that Freezo's plan to ascend to godhood had already made him immortal, Bobby stabs himself fatally with the same knife.

The Dragon Friends take Bobby's corpse with them when they escape aboard The Flying Dutchman back to the Heart of Glass. They put his body inside his Hummingbird combat shuttle and send it on autopilot to Titania, the Queen of the Feywild who they had previously rescued, in the hope that she will find a way to resurrect him. His body is accompanied by a note reading "I am dead. Please make undead." While they are away exploring Freezo's tower in the Badlands, their clumsy wording prompts Titania to create a phylactery which can raise and command Bobby as a zombie. She gives to Lady Casilda, who takes command of the Heart of Glass and forces the undead Bobby to fight his friends. They kill her and Jeremy Scaleson grabs the phylactery and commands zombie Bobby to stop.

Eventually the other Dragon Friends return to Freezo's tower and pass through his magical archway to what they believe is the Dweomerheart, home to Freezo's all-knowing goddess of magic, Mystra. In truth, though, Hyperion Max has Six been in hiding all along and tampered the portal so it would trap Freezo forever in a tiny pocket dimension. Luckily the bard Bassbass Wihouveberry, who had travelled with the Friends, was Mystra trapped in mortal form by Freezo as part of his plan. In return for letting her take Freezo to the real Dweomerheart and trying to undo the evil in his soul, she resurrects Bobby - a feat impossible for anyone of lesser power than a god - and transports the Dragon Friends back to Daggerford.

Bobby and the other Dragon Friends become the Dukes of Daggerford, and begin to investigate a prophecy about the end of the world. His chest now has a ruby crystal structure covering his stab wound from The House Eternal and Thomas Smedley recognises him as being touched by Carcosa, he is able to view visions of the Herald with the aid of hallucinogenic paint and through dreams of his own. Bobby becomes darker in this series and agrees with Bushu-D2 in killing one of the Hofferman Twins to stop the Brother's Gate from opening, a plan he fulfils during the chaos of the perfomance of Who Is Stealing My Cabbages Killing Roman Hofferman. The Dark Lord Strahd notices this change and his resurrected status letting him know he cannot walk from death easily and offering him a place at his right hand. Bobby helps Philge in delaying a weakened Strahd from bringing Carcosa back. With the Dark Lord back on his throne the Dragon Friends are exiled from the Sword Coast

Bobby appears to get on the Ship out of Waterdeep with the rest of the Dragon Friends before falling backwards off the edge after it has left the port. He travels to Barovia and stays in the tavern writing Jingles for merchants. He gains a level in Bard. Bobby uses the money for information from the Gyspy tribe to find out how to meet the werewolves of Barovia. Time passes and with funds running dry (after some unsuccessful jingles) Bobby is confronted by Braesley asking for him to create or find a relic of Pelor.He refuses to replace the damaged relic of Pelor. Unable to stay at the tavern he leaves to live in the wilderness, using his Lunar sword to stave off the dreams of Carcosa

3 Years after leaving Waterdeep, we meet Bobby Gribbits and a newly returned Baston who rescue Janos Meer from execution. They join the resistance against Strahd and his allies 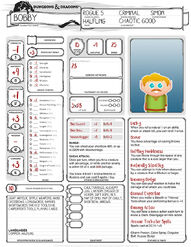 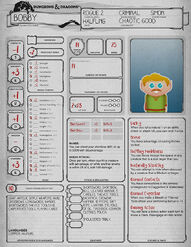 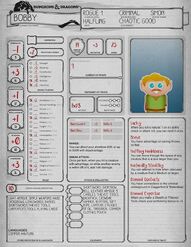 Level 1 Character Sheet
Add a photo to this gallery
.
Retrieved from "https://thedragonfriends.fandom.com/wiki/Bobby_Pancakes?oldid=3336"
Community content is available under CC-BY-SA unless otherwise noted.