Philge the Merciful, Mother of Hobgoblins, Junior Vice President, War-chief of Brisbane, Philge the Emancipator, Philge the Freedom-Giver, Her Prettiness Duke of Daggerford

Philge is a half-orc Barbarian (later Barbarian/Wizard) and member of the Dragon Friends. Philge is very large and extremely strong, especially after entering a Barbarian Rage.

Philge's combination of confidence, optimism and stupidity make her a natural-born leader. She quickly rises to positions of power when left on her own among goblin tribes and office workers.

Philge's half-brother, Dilge, adventures with the Dragon Friends in Waterdeep before being killed by Davin Tyrril's captive Black Dragon.

Before the Dragon Friends

Philge's parents were an unlikely love story: her mother was the strongest warrior in the orc army and her father was a mercenary law officer ("Policegoblin.") Their happy family was dashed when Philge discovered her father was cheating on her mother with a Fairy. He then abandoned them and ran off to the Feywild, leaving Philge with a deep resentment of authority, especially cops.

Philge also had a half-brother named Dilge, also a half-orc, but it's unknown which parent they share.

Despite her tragic home life, Philge was an athletic, enthusiastic and outgoing young half-orc whose early life was filled with traditional coming-of-age awkwardness. She excelled at the javelin but was not very good with hurdles. She attended prom with a spider and wore a spider-silk dress. Her mother may or may not have eaten her father.

Philge had an aunt named Bilge who, at some unspecified point in the past, fell into a big tub of acid and lived in a cave.

Philge and the other Dragon Friends have been living large in the Dragonback Tavern in Daggerford. The proprietor, Grimm Saltback, now demands that they settle their debts. Rather than just find a job, Philge tries to take up this demand with the town tenant's association, but cannot find it. She does find a loyal (dead) rat companion which she names Katy.

The Dragon Friends decide to audition as performers for the Duke of Daggerford's birthday revel. While traveling, Bobby tries to gently explain that Katy is dead, but the tender moment is interrupted by Freezo and they just let it go after that.

Philge is baffled but unbothered when Freezo randomly murders Leonard Swiftfeatures, a magician who is also auditioning as a performer. This makes them convenient targets to be framed for the Duke of Daggerford's murder and jailed. Philge's first kill in the show is their kindly jailer, Barry Swiftfeatures.

While on the run from the law, the party is abducted by Frisko's goblin tribe and put on trial for goblin crimes. Their goblin lawyer, Gribbits, explains a series of pie-based trials they must defeat to win their freedom. Instead, Philge kills Frisko and declares herself the Mother of Hobgoblins. This is not the end of Bobby and Freezo's captivity however as the newly ascendant Philge declares, "Me want see how this plays out."

When the party is reunited in Waterdeep, they make off with all of the tribe's money and work on meeting the demands of Bobby's ex-employer Janos Meer and the Waterdeep Guild of Thieves, Tricksters, and Beggars. Philge spends much of this period with Gribbits strapped to a desk on her chest like a baby. During a shopping trip in the city they run into Philge's wizard half-brother Dilge. He is eager to join them on their adventures. Despite normal sibling competitiveness, Philge and Dilge are happy to be in each other's company.

This family reunion ends in tragedy when Davin Tyrill, the very man who framed the Dragon Friends for the Duke's murder, attacks them with a mind-controlled Black Dragon. Dilge is killed while trying to protect her. She is too in shock to deal with this loss right away but is profoundly affected by it in the interval before Season 2.

In the Season 1 finale, she misunderstands Davin's master plan so badly that she actually ends up accelerating it. This has huge ramifications for their friend Kithercy Gellantara but otherwise turns out fine.

Philge appears to have arrived in 2075 several days before the other Dragon Friends. She was recruited by Mr. Sour and completed a mission for him, and was then free to get a job in the Horizon corporation where she discovered a remarkable natural talent for hacking and computers that enabled her to rise to Junior Vice-President, and also apparently had a "thing" with fashion designer Raoul Chamgerlain. The other Friends accepted Mr. Sour's further offer of work in part to track her down, and were referred to her to explain their failure to protect Johnny Playstation from being snatched by Voss-Saito. She agreed to rejoin them to help recover Johnny.

Her help initially consists of punching Bobby for looking too much like Raoul and flirting with Glitter Gleam, bursting into Glitter's private quarters and attacking two riot police with a pair of fruit platters, wrecking several civilian cars while attempting to carjack them, and being trapped in a net by riot police. Mr. Sour then obtains a cyberdeck for her and she is able to act in her element, disabling LAICEU, the ZOG Bank security AI and enabling the Friends to enter Freeside - but then blowing up an ATV by siphoning helicopter fuel into it.

Arriving at a chapter camp of the Tribe Of A Million Kings, Philge killed the leader to take command of the tribe and claim their weapons and armor, then drank 12 mid-strength beers at the Brisvegas Ute Muster. On arrival at the Haystack casino, she attempted to seduce Julian Fairbanks, then ate 6 million credits of his poker chips and then vomited them and the 12 mid-strength beers over him. These credits would have paid the Friends' way into the Skyway Lounge with plenty to spare, but instead she bet them all on roulette and lost before getting them all captured for the robbery of Julian. She aids their escape by staging a fight with Freezo and ascends to Freeside with them where she fly-tackles Johnny Playstation and accidentally hits him with a skateboard. Philge is able to protect the other Friends from the arriving cops and stoot-men and then to defeat Sirius-8 Dumbleboy in a hacking duel to seize control of the Zhivago Twelve, elite hacking crew who aid the Friends in sneaking into the Freeside control room.

Within Freeside, Philge is able to perform the incredible feat of entering the Matrix again while already in the Matrix to enter communication with Julian Fairbanks' AI and learn of his plan to destroy Freeside. She successfully bluffs Mr Terminal into handing over his overload unit tuned to kill the Zhivago Twelve but accidentally kills Hermione the Ranger Danger by stamping on it, believing this would disarm it. After Mr Terminal is revealed as a peripheral, Philge's hacking skills enable her to trace the identity of its operator to discover Michael Hing (NPC), who she is instrumental in defeating via a stirring speech on the value of friendship; and it is Philge who plugs Johnny Playstation's cryocell into the Freeside Matrix node, resulting in his apotheosis.

During the three years that pass after the end of season 5, Philge remains in Daggerford and gets by with a complicated side-hustle involving the sale of intricate clocks. She also learns to read from a talking dog (who was in turn taught to read by a talking dolphin), and unlocks an inner magical power, learning the cantrips friends and one other, as well as the first level spell find familiar, allowing her to summon a hawk familiar, Flappy. 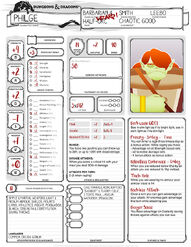 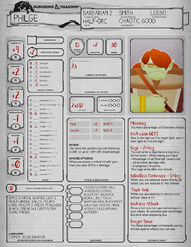 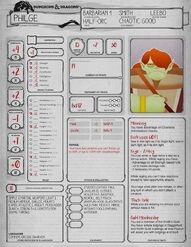 Level 1 Character Sheet (Barbarian)
Add a photo to this gallery
Retrieved from "https://thedragonfriends.fandom.com/wiki/Philge?oldid=3461"
Community content is available under CC-BY-SA unless otherwise noted.